At the 2019 Labor Seder, “In Every Generation,” JUFJ intern Ariana Brenig spoke about what working at JUFJ means to her.

Hello! I’m Ariana, I’m 17, I’m an intern at Jews United For Justice and I’ve been working here since September.

Before I started working at JUFJ I had school, a job, and various things going on but I never felt like I was doing anything. It took me a while to figure out what I felt like I was supposed to be doing. I had always been interested in social justice, in change but in an abstract way. I never really realized that regular people (i.e. me) could make a difference.

In between getting angry about all the injustice in the world and exploring my Judaism, I realized there are ways to work for justice and for change in ways that are uniquely Jewish… so I came to work at JUFJ.

When I signed up to intern I thought it would look like the envelope-stuffing-coffee-getting kind of internship that the media shows us. This was totally wrong in the best possible way. Immediately, everyone acted like I was just a new staff member, there was no talking down to me or making me do busy work for no reason. Getting to actually be right in the middle of everything and see how my day to day actions are making a difference is amazing and makes me want to do more.

Since I started in September it was right in the middle of election season. Immediately I was thrown into organizing and political work I had never done before. I hadn’t worked on any type of campaign before but I was ready and excited.

On like my second week I went to a few planning meetings for the JUFJ Campaign Fund, our cousin organization that does electoral work, at [JUFJ volunteer leader] Carol Stern’s home, with the rest of the Montgomery County team, staffers Laura and Emmanuel. When I went to the first meeting, it was still warm outside and it was one of those autumn days that just makes you excited. When I got there Carol made me a tuna sandwich. We were munching on our sandwiches and salad,  everyone telling stories about their school days. I was welcomed not only into the work but into the team and Carol’s home so immediately.

These meetings were mostly about the Campaign Fund’s work on the upcoming election. Looking back, that election seemed to me to be a success. While it was sad that some of our most amazing candidates didn’t win, it still felt like we had done a good job and I was excited to come back and fight another day.

I had worried that being much younger than everyone would change the way I interacted with staff, volunteers, legislators, everyone, but really it has not. I feel like I have SO much to learn, I learn at least four things a day, whether it is skills in writing, speaking, organizing or even technology. I feel humbled to learn from all of you with more life experience and hear your stories, and I am proud to say my stories are also just as important.

I have also learned so much about making change in a democracy. When I took National, State, and Local Government in 10th grade, I feel like I didn’t learn anything about any of this. I learned about the three branches of government and about key Supreme Court rulings — which is important too — but did I forget or did we not learn anything about state and local governments? I was taught that it’s important to vote, that we make change by voting – but there is SO MUCH ELSE.

I never knew how much can be done by a relatively small group of people in this community and our partners that show up at hearings, make phone calls, and go to house meetings.  I didn’t know how much was done by regular people. I thought it was spectacular individuals that are special, better, able to do heroic work. But that is not the case at all! Everyone can do it, everyone is capable. We’re all regular people who have dedicated ourselves to doing this. This is the layer of political work that’s often invisible (we DEFINITELY didn’t learn about community organizing in civics class) but it really changes everything.

Before coming to work for JUFJ, I always had issues I wanted to do something about, like criminal justice reform. I wrote essays and gave presentations in school, put money in the tzedakah box at Hebrew school, but left feeling empty because that didn’t really do anything. Being part of JUFJ put me in concrete fights for what I believe in, by putting me to work on actual bills that succeed or fail in part based on what we and our coalitions do.

This work has also felt like a real fulfillment of what I was taught Judaism was about. I like Hebrew school, services, and synagogue. And at the same time, I want to be living those values beyond what we do in the synagogue. For me, the Jewishness of what we’re doing in JUFJ feels naturally, intentionally, and intrinsically tethered to our traditions, our values, and the things that we in our community actually believe.

Sometimes it feels scary, being a young person today, there are so many things that feel way out of my control. When talking about climate change and other big issues, the conversation is very focused on the future, and can get so overwhelming. It is so easy, especially as a young person I think, to get distracted by the far future and ignore the struggles that are happening right now, including climate change but also any other big issue. We are already facing consequences, we and the people around us and our communities. We need to continue to focus on the future and also on showing up here and now to change the things that we can change. It was our testimony, emails, and calls that helped pass a $15 minimum wage in Maryland and override Governor Hogan’s veto. Our actions can help our legislators make a budget for next year that reflects our values.

I know you already filled out your commitment cards, and thank you. The next time I call you or email you to take action or come to a meeting I hope you’ll say yes! None of us is a hero, but you can be one of the regular people who amaze me with your action and dedication. Thank you for helping make this community I could step into – and please be ready to follow me when I ask. 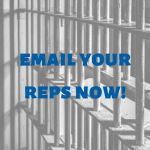