We write as a coalition of Jewish organizations, some located in Howard County and others around the state of Maryland, along with our interfaith partners, deeply concerned with your Administration’s ongoing collaboration with Immigration and Customs Enforcement. The Intergovernmental Service Agreement (IGSA) through which Howard County has received over $14 million, has facilitated ICE’s work shattering immigrant families and communities across the country and here in our state. County Executive Ball, we call on you to restore Howard County’s civility by ending the IGSA with ICE. You are a leader of vision, values, and sound policy, and we are confident that you will make the right decision.

We call on you to end this agreement for the following reasons:

First, when local government and law enforcement enforce federal immigration policy, all residents of Howard County are endangered. By partnering with ICE, the county diminishes the trust immigrants, their families, and their neighbors have in local government. Residents are afraid to call police for emergency services, are less likely to report crimes, and less likely to provide information to law enforcement. Every resident of Howard County is less safe. By ending the IGSA, you will send a strong message to immigrant families and to all of us that Howard County is a welcoming and safe place.

Second, it is not only immigrant families who are anxious to see Howard County cease its collaboration with ICE. As Jews, we bear the weight of intergenerational traumas. Our trauma is rooted in the actions of Nazi Germany during the Holocaust and in the memories of family members denied entry into the United States even after fleeing Europe for their lives. Our parents and grandparents were blocked from reaching safety here, or even reached these shores and were sent back to Europe to be slaughtered. We see painful parallels with the immigrants and asylum seekers fleeing violence today who are barred entry to the US, or sent back to face death in their countries of origin. We are steadfast in the belief that the United States and Howard County must provide a safe and welcoming new home for those who need it. Our teachers and families taught us that  “Never Again” means never again for anyone.

Lastly, this agreement does not conform with Howard County’s core value of civility. There is nothing civil about the Trump administration’s immigration policies of mass deportation, family separation, use of collective punishment as a deterrent, and understaffing of immigration courts. As President Trump diverts public safety and defense funds to pay for his wall on the southern border, we also recognize that current rhetoric and policies build walls between communities across the country. The Intergovernmental Service Agreement is one such wall, dividing neighbors, classmates, and families, and it must be torn down.

You have shown your support for Howard County’s foreign-born residents in the past.  We ask you to continue that legacy of compassion and justice. Thank you for considering our request.

Want to send a message as an individual? Click the button to email County Executive Ball or to have JUFJ contact him on your behalf. 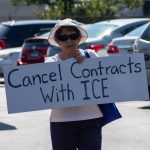