JUFJ superstar Carol Stern is also a participant in JOIN for Justice’s “Don’t Kvetch, Organize!” course on community organizing. She shared this reflection on writing testimony about solitary confinement with her JOIN cohort.

How I learned to relate and write testimony about Solitary Confinement

Let’s say you’re involved in a cause that many people in your own community don’t think about.  If someone asked you why you – as a person or as a Jew – would be devoting your time there, how would you answer them?

I was moved to take on the issue of solitary confinement or what Maryland calls “restrictive housing” after I learned that my “progressive” state had one of the worst records in the United States for locking inmates in solitary. As part of my 7 week course sponsored by JOIN for Justice, I took on the challenge to work on changing the Maryland laws regarding solitary confinement for inmates, especially pregnant women and juveniles. Most people in my community have no knowledge or experience about this issue.  I had no knowledge about this issue until I studied it this year and became an advocate for change.

When asked to write testimony for the two bills in Annapolis, my first instinct was to pull out all the statistics and write a research paper on the terrible effects of solitary confinement on inmates and how it was considered torture by the United Nations.  After showing this “research paper” to my experienced group of JUFJ leaders, a few of them gently wrote me saying that this was excellent research, but I should go back and find a personal connection to the issue and look for Jewish texts that will frame my testimony.  Okay, this was indeed a challenge but it certainly opened my eyes to the power of storytelling when connecting with a cause that seems far from our daily reality. Here’s how I reframed my testimony:

There are two Jewish texts that shape my religious and moral abhorrence of solitary confinement in general, and especially related to juveniles and pregnant inmates. In Genesis Chapter 1, we learn that the human is created in God’s image – B’tselem Elohim. We all contain the divine spark, and we all deserve to be treated with respect and dignity. This applies to all people, whether they are incarcerated or not.

The second text is in Genesis Chapter 2, where we learn that “It is not good for the human to be alone.” This is a powerful statement about our need to be nurtured by others at all times in our life but, I would add, especially for juveniles, who are immature and needy human beings. It is never good to be away from the nurturing company of other people, but juveniles or pregnant women should not be alone during the difficult time of incarceration. These two verses inspire the spiritual and moral imperative to work for changes to solitary confinement laws.

As a Jew and a mother of two children and a grandmother of three, I cannot imagine the pain that any parent must feel when they learn that their child has been placed in restrictive housing and isolated from human contact. Teenagers have not yet finished their education, their brains are not fully developed and they must have human interaction. exercise, proper diet, and stimulation to fully reach their potential.

I also know the awesome power of childbirth. Fortunately, I easily delivered my son and daughter without anesthesia and I was able to completely appreciate the experience of creating new life. In addition, I was lucky to attend the births of my three grandchildren, where my daughter was assisted by an amazing doula and I watched the miracle of these precious lives begin. All women should be allowed to have the positive birthing experience that both my daughter and I had. I know it would have been torturous for me or my daughter to have virtually no human contact in the last trimester and postpartum period.

Solitary confinement is an archaic practice that should be ended and has been proven to be detrimental to all inmates. I know that if my children or grandchildren were exposed to extreme idleness, sensory deprivation, and lack of human interaction, they would suffer lasting physical and emotional damage.  It is for all these reasons, that I support these two bills to eliminate solitary confinement for juveniles and pregnant women.

Now when I tell anyone about the issue of solitary confinement and how these laws need to be changed, I don’t use statistics or scientific research on the topic, I draw from our Jewish texts and my own experience of motherhood and childbirth to make this cause real for anyone listening. 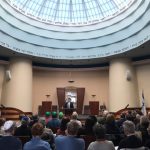 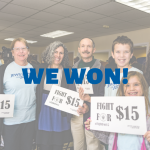 Fight for $15 is the law of the land!Baltimore, MD, Fight For $15, Maryland State, Montgomery County, MD