DC’s whirlwind budget season is winding down, and thanks to sustained advocacy and courageous community leadership there’s a lot to celebrate! JUFJ fought for a budget that will #PutPeopleFirst, and our coalitions made some important progress. Here’s some of what community activism achieved this budget cycle:

Birth to Three for All DC

Along with our Birth to Three campaign co-chairs SPACEs in Action and DC Working Families Party, JUFJ played a leading role in securing nearly $16 million toward revolutionizing DC’s fractured systems of health and educational support for infants, toddlers, and families! This year’s funding includes over $9 million to make childcare more affordable and over $4 million specifically to support children of immigrant and homeless families!

The Birth to Three community delivered over 100 testimonies at budget hearings, made over 700 calls and emails to Councilmembers, and collected over 1,000 petition signatures for Birth to Three funding. Thanks to the dozens of community members who testified in front of Council, which helped convince seven Councilmembers to add more funding during the budget process! Click below to read testimony from Jane Hayashi-Kim, a member of JUFJ’s Birth-to-Three core team.

While the Council did not fund everything in the FBC or TWHC platforms as fully as we asked, this year’s budget will end chronic homelessness for a record-breaking 615 individuals and 180 families!

Back in 2010, the developers of the Line Hotel in Adams Morgan promised good jobs for DC residents to build and staff the hotel, in exchange for a $46 million tax break. They broke their promise. Now, the Council is holding the hotel accountable, and using some of the money the Line Hotel owes to repair the city’s  deteriorating public housing. While it’s not nearly enough to fix everyone’s home, it’s a start.

In addition, Events DC, which runs sports and conventions, has over $400 million in reserves. FBC members advocated for tapping that slush fund to repair public housing, and Chairman Mendelson allocated nearly $25 milllion! The DC CFO insists that the reserves are to pay back convention center investors, even though the money is just piling up in the bank. We will let you know if more community activism can help secure this funding!

Check out the full FBC platform

Ward 1 Councilmember Brianne Nadeau showed effective moral leadership during the budget process. She identified nearly $15 million in additional funding for housing, Birth to Three, and more vital programs by scaling back a tax break for wealthy tech companies — and she convinced eight of her colleagues to support this important amendment. Thanks to her and to Councilmembers Allen, Cheh, Evans, Gray, Grosso, Silverman, R. White, and T. White for choosing people over corporate profits!

Want to know more about budget advocacy, and how you can help win universal childcare for all DC kids? Join us at our community convening on Tuesday, June 25 at 6:30 PM. We’ll dive deeper into the nerdy details of the budget process and the moral imperative of supporting all DC kids.

RSVP for the Convening 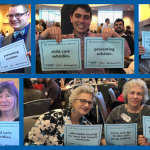