Yesterday, the DC Council voted unanimously to send the fiscally irresponsible and unjust Homestead Exemption Increase Amendment Act of 2019 (B23-0079) back to the Council’s Finance and Revenue Committee.

This is a MAJOR victory for residents of the District who rely on the DC budget to fund good schools, build affordable homes, and promote healthy communities.

This bill would provide a roughly $400 tax cut for a majority of homeowners. However it would disproportionately benefit wealthy homeowners while leaving fewer resources available to those with the greatest need, such as low-income seniors (i.e. lower income seniors who already qualify for other tax relief programs would only see a savings of $18/month while higher income working households would receive $35/month).

A tax cut for wealthy homeowners who are not asking it is a bad solution to the challenges of gentrification and displacement in our city. It is irresponsible to promote a massive tax cut that will cost the DC budget $38 million annually, especially within days of DC’s Chief Financial Officer announcing DC’s $41 million loss from the government shutdown.

JUFJ, the JUFJ Campaign Fund, and our many allies who care about a fair and just budgets for the District spoke out forcefully against this bill. We urged the Council to either resoundingly reject any machination of this bill, or replace it with help for low income seniors, or other residents more in need of property tax relief.

In advance of this vote, we were part of a swell of rapid-response organizing efforts that made it clear to the Council: a tax cut that benefits mostly the wealthiest residents is the wrong direction for DC, and supporting it comes with consequences. This was a more forceful position than advocacy organizations in the District usually take in the face of unjust legislation.

In a matter of days, more than 190 homeowners signed a forceful petition rejecting this tax cut. This past week we showed the power and importance of advocacy and organizing. Let’s keep it up!

Here’s the bad news: the bill is going back to committee, but it can be brought back at any time. We must keep our pressure up. Together we can tell the Council to write smarter, more equitable tax laws that will move DC toward racial and economic justice. Keep signing the homeowner’s petition if it applies to you and plan to testify before the Council during budget season (email Zach@jufj.org if you’re interested!). 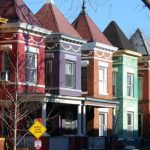 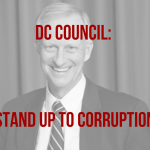