In the wake of the 2016 election, I felt compelled to do something. The specific something was less clear. I pride myself on my twin abilities to show up and carry things. It’s amazing how far those two skills will take you in life. So it seemed natural to join one of the increasingly frequent marches and demonstrations and protests, and, well, show up. And with any luck, there’d be a sign to carry.

That went well enough. I met some great people in front of the White House on November 9, 2016, and I marched in favor of women in January. There was a steady stream of protest-demanding policies and statements.

It wasn’t long before I ran into my friend Claire Landers. We were at a meeting in Baltimore, sponsored by CASA, where we were expressing our disagreement with the president’s policy changes regarding undocumented immigrants. We talked, and she mentioned JUFJ, which I had not heard of.

Not long after, we ran into each other at a protest at the airport, where we expressing our disagreement with the president’s Muslim Ban. We talked more. JUFJ was mentioned.

Then we ran into each other at the capital in Annapolis. I believe we were encouraging the governor to consider protecting undocumented immigrants and Muslims from some of the president’s worser notions. If I remember correctly, Claire was at a table promoting JUFJ, and I was circling the capital building with a few hundred like-minded souls. We didn’t get to talk too much.

Now please don’t imagine that I was following Claire from protest to protest. There were a lot of other protests, and a number of other groups with which I was loosely affiliated – Progressive Maryland, Indivisible, a few Facebook groups, it’s all a bit hazy now – I marched and I canvassed and I protested with groups or alone.

I was busy, but I didn’t feel effective.

There is an empty space in my memory where I should know how Laura Wallace and I connected. Somewhere along the way, we started emailing. And emailing quickly led to coffee at my favorite Bethesda coffee spot, Bethesda Chocolates. We talked at length, and explored whether JUFJ and I would be a good fit – what was their mission, what were my skills (show up, carry). I was pretty sold. Laura’s compelling.

There was the comfort of a shared mission and a shared history and a shared shattering at the horror of the Pittsburgh synagogue attack. Canvassing with a fellow JUFJer, we were assigned Peter Franchot’s house to visit. Well, we were there to visit his wife, but he answered the door. Finding out we were Jews, he hugged us both. It was a highlight of a powerfully healing day.

I was busy, and I was more effective, but I didn’t feel like I was quite filling the role I needed to. So I arranged for coffee with Emmanuel Cantor. We talked about our journeys. Like Claire and Laura, he’s easy to talk to, encouraging and supportive. I felt more involved after our conversation, and my plan was to do some writing for JUFJ.

Then life happened. Work got crazy busy, my personal life experienced some turmoil, I took on a second job. The usual. And so I disappeared from JUFJ. I tried to poke my head in when possible, but it wasn’t much.

And then, I got an email from Laura asking me if I’d write a blog post about my experience of being introduced to JUFJ over coffee. And now we are here.

Full disclosure, I love coffee. So I am surely biased in favor of being introduced to JUFJ over coffee. That said, it worked. The fact that Laura and Emmanuel took the time to sit with me and explain what JUFJ did, and how I could be a part of it smoothed my path from concern and protest to being an effective part of change. Tied into the video calls, the book discussions, the organizing, the training – it’s like having a guide along your path to engagement.

So thank you, Laura and Emmanuel, for bringing me into JUFJ, for accepting the contributions I was able to make, and for creating the space in which my contributions matter.

Want to get involved and get a cup of coffee? Sign up below for a one-on-one meeting with a JUFJ organizer in a coffee shop near you!

Meet with an organizer 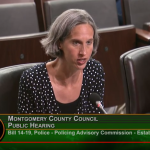 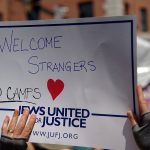