My name is Jeffrey Rubin. I am the son of a small business owner, a Maryland resident since 1986, and an active member of JUFJ, an organization that includes 5,000 Marylanders. I provide this testimony in strong support of an increase in the minimum wage as outlined in HB166.

JUFJ believes in the Jewish tradition that the value of work and the dignity of working people are sacred.Throughout Maryland, the minimum wage has not kept pace with the rising cost of living and hardworking people cannot meet the financial needs of their families. By increasing the minimum wage to $15 per hour over four years (or seven years for tipped wage earners), HB166 would help over 570,000 workers earn a sustainable living. While it is true that the cost of living varies across the state, it is also true that the need for a boost in income is great everywhere in Maryland. The timetable specified in this bill would establish an appropriate floor for wages throughout Maryland. Subsequent indexing of the minimum wage to inflation would reduce the chance that the disparity between wages and the cost of living would recur. In addition, because the cost of living is higher in some areas around the state, jurisdictions must retain the right to pass legislation governing the minimum wage in their own localities.

It is time to eliminate the exemption of certain types of workers from being eligible for the minimum wage. Agricultural workers have the same needs as others. Youth workers contribute much of their earnings to pay for their family expenses or college education: depriving them from the full minimum wage is unfair and costly on both counts. Making a distinction between workers in small versus large businesses is shortsighted, creating a disincentive for workers to remain employed at small businesses and thereby increasing the cost of labor turnover. Besides, the economic stimulus that results from putting more money in the pockets of the working class is diminished when fewer workers have access to it.

For all these reasons, we respectfully urge you to give HB166 a favorable report. 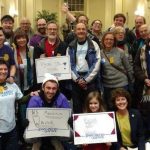