Thank you to Councilmember Nadeau and Councilmember Gray for the opportunity to speak on this important issue. My name is Jenna Israel, and I’m a community organizer with Jews United for Justice. I’m also a Ward 4 resident.

JUFJ is a member of the Way Home Campaign, a DC coalition working to end homelessness in DC, and supports the coalition’s ask that the DC Council stop all encampment clearings during the pandemic in accordance with CDC guidance, and to stop the creation of all no-camping or no-tent zones.

About a month and a half ago, Jewish people in DC and around the world celebrated the holiday of Sukkot. The central custom of the festival is putting up a sukkah, which is kind of like a temporary hut, and spending as much time in it as possible. For eight days, we eat, rest, and maybe even sleep in it. The sukkah is meant in this time to serve as our home, and even though it’s a temporary structure, Jewish tradition dictates that it must enable us to live as full and dignified a life as we would live in a permanent structure. In other words, temporary structures and living situations are as legitimate as, and should be as respected as, permanent ones. Our unhoused neighbors deserve our respect and to be able to lead as full and dignified lives in encampments as they would in more permanent housing.

The office of the Deputy Mayor for Health and Human Services is not treating residents with respect and is actively making it more difficult for them to lead the fullest and most dignified lives they can where they are. The pilot program to clear encampments and create no-tent zones is harming our unhoused neighbors. The way this pilot program has been implemented has not respected the property of encampment residents, which has been thrown away as if it were trash, and shows no regard for encampment residents’ health or safety. According to the CDC, moving encampment residents into group housing or away from service providers only increases the likelihood of spreading COVID-19. In terms of residents’ safety, as we all know, a resident was bulldozed in his tent last month. It was horrifying, and the pilot program should have been paused in its entirety that day for significant reevaluation. Not doing so was a sign of the disregard the government bears toward our unhoused neighbors.

What’s more, the creation of no-tent zones as part of the pilot program criminalizes homelessness. By making it illegal to camp in particular areas, we’re exposing unhoused people to the possibility of legal punishment, for the so-called “crime” of not being able to afford rent in a city where rents are increasingly unaffordable. The DMHHS pilot program isn’t helping our unhoused neighbors; it’s endangering them.

Jews United for Justice and our partners at the Way Home Campaign are asking that the District stop clearing encampments until every resident is safely, permanently housed in individual housing, in accordance with CDC guidelines. And the District must stop creating no-tent or no-camping zones in the wake of the clearing of encampments. The program must be immediately paused and the Council must take steps to that end. Thank you again for the opportunity to testify, and JUFJ looks forward to seeing action from all relevant authorities soon. 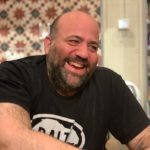 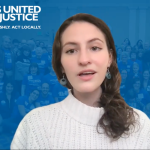