See below for JUFJ’s testimony on funding Access to Counsel in Eviction Cases, HB724/SB662. This bill passed out of the General Assembly in the 2021 session, but without a funding source. JUFJ’s position of this bill was favorable. Joe Magar, a member of the Baltimore Action Team, wrote this testimony.

My name is Joe Magar. I live in Baltimore City, District 41, and am submitting this testimony in strong support of HB724/SB662, Access to Counsel in Evictions Special Fund- Funding, on behalf of Jews United for Justice (JUFJ). JUFJ organizes more than 6,000 Jewish Marylanders and allies in support of local and state campaigns for social, racial, and economic justice.

For centuries, Jewish law has recognized the importance of equal representation, even in civil proceedings like landlord/tenant disputes. In practices dating back to at least the late 4th Century, civil disputes are heard before a panel of three rabbinic judges. The two parties involved in the dispute each choose one judge, then those two judges pick third, thus minimizing any risk of individual bias or influence. HB724/SB662 will rebalance the unequal power dynamic in rent court to minimize those same risks, by funding the Access to Counsel bill passed last year (HB18).

Over the last year, that need has grown more urgent and the people along with the city and state services, they turn to are stretched even thinner.

Advocates for this bill have presented the data on how the gross power imbalance in housing court contributes to a worsening eviction crisis, economic and racial disparities, and allows hazardous living conditions to go unaddressed. They have also outlined the economic benefits of assuring renters’ rights are defended and reminded all of us how regardless of these benefits it is our moral imperative to defend the rights of all Marylanders. And, they’ve talked about the impact of the pandemic on this worsening eviction crisis.

Last year I wrote testimony talking about my experience growing up in a family with a property manager. In this I wrote:

Anyone whose parents are small business owners knows, at the very least, two things; they work hard, long hours, and the kids spend A LOT of time at work. Both of my parents are property managers in the Detroit Metro area and I pretty much grew up in their office. I went along with them visiting properties all over the city, meeting contractors and prospective tenants and inspecting damage and subsequent repairs. I also sat quietly for what felt like millions of hours as the phone calls poured in about everything from broken lights and leaky pipes, to fires and illegal activity on the premises. Each one of these calls was documented and addressed.

It’s hard work, but all broken lights get fixed. The leaky pipes get replaced. Fires usually aren’t too big, but even the small ones require special contractors to clean the smoke damage. When there are complaints of illegal activity, the appropriate authorities are alerted, and incidents documented. They manage units all over Detroit and everything—from luxury to subsidized—is kept up to code. They don’t cut corners.

Of course, eviction happened too and was handled with the same strict adherence to regulation that guided all of my parent’s business practices. They didn’t bring the kids to court, but they did put us to work filing as soon as we could reliably alphabetize documents, so I can attest to the detailed nature of their record keeping. Documentation of every work order, payment and request assured that when they did go to court their case was presented clearly and in accordance with the law.

I don’t think my parents are champions of housing justice any more than I think that this bill is the silver bullet that will solve a housing crisis deeply rooted in inequality. They are just small business owners who don’t break the law. My parents raised two kids in a nice neighborhood and helped us both get through college and grad school, without breaking the law or weaponizing eviction.

When Maryland passed the Access to Counsel bill last year, it was a signal that we were done allowing those who don’t wrestle with putting families out and cut corners for their own gain, to take advantage of renters. It was also a signal to the business community who follow the letter of the law, that Maryland will no longer incentivize cost cutting and the weaponization of eviction and that it recognizes that those who play by the rules won’t be affected by enforcing them. If we fail to fund the Access to Counsel Program, it’s a signal that that promise was only lip service. If we fail to fund this measure, it’s a wink after being scolded.

On behalf of JUFJ, I respectfully urge this committee to return a favorable report on HB724/SB662 and assure that we can properly fund the access to equal representation for low-income Marylanders when facing eviction. 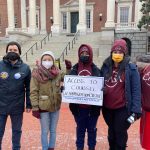