Chairman Davis, members of the Committee, thank you for receiving our testimony. We are writing on behalf of the Montgomery County Young Democrats (MCYD), a group of young Democrats who are active at the state and local level in support of policies that will benefit all Americans. We urge a favorable report on HB 166, which would raise the minimum wage in Maryland to $15 per hour by July 2023. It would also eliminate the subminimum tipped wage by 2027 and bring tipped workers up to the full minimum wage.

Currently Maryland’s minimum wage is $10.10 per hour, after legislators previously voted to raise it. This was an excellent first step, but $10.10 is about $21,000 per year, which is far too low to live on! No one should have to live in poverty, and too many workers who earn low wages struggle to support themselves and their families.  This bill is a long overdue measure that will benefit Maryland workers, families, and businesses. It would increase the state’s minimum wage based on the annual growth in the Consumer Price Index, ensuring both that businesses can prepare for the increases and that workers will receive higher wages.

All Marylanders should earn a wage that enables them to support themselves and their families; exemptions will hurt the people who are carved out, who are often the least financially secure American workers. HB 166 also contains enforcement provisions to ensure workers are not being underpaid and exploited, which is essential—laws are worth little if they are not enforced.

For a generation, workers have suffered because of largely stagnant wages and rising income inequality. Many Maryland families find it hard to afford basic items and expenses, and in many areas they face some of the highest costs of living in the nation. In Salisbury, one of the least expensive cities in the state, single workers without children need an hourly wage of $13.37 to afford housing, food, transportation, and other basic needs. For people raising children, needs are substantially higher. And in Montgomery County, single workers need to earn $21.10 to pay for basic needs.

The Economic Policy Institute found that 573,000 Maryland workers would benefit from this proposal.90% of those helped are adults who already work full-time, and nearly one-third of them are single or married parents raising children.  The typical worker would see cumulative income gain of $4,600, which could make a significant difference in their lives. And the benefits are numerous and long-lasting: lower poverty rates, improved infant health outcomes, improved health and wellbeing, improved educational outcomes, better graduation rates, and more consumer spending.

A $15 per hour minimum wage will also boost the overall economy. Higher wages mean that workers will be able to spend more on rent, groceries, transportation, and other goods and services that help their families.

The Committee should heed Dr. Martin Luther King Jr.’s program from the 1963 March on Washington—which called for “a national minimum wage act that will give all Americans a decent standard of living”—and pass this $15 per hour minimum wage bill.

MCYD urges all committee members to support and vote in favor of this bill. Thank you. 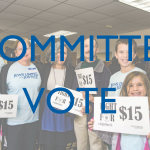