My name is Noa Meyerstein, and I am a first year student at Walter Johnson High School. I am part of Bonimot Tzedek, a Jewish youth group of Camp Moshava Habonim Dror dedicated to social justice. I am providing this written testimony to the Maryland General Assembly in favor of SB627, which calls for the full repeal of the Law Enforcement Officers’ Bill Of Rights (LEOBR).

The Jewish values I’ve learned from my community and education include being kind above all else, to help others whenever I can, and to speak up when something isn’t right. There are two Jewish values in particular that I would like to share. B’tzelem Elohim is the value of every individual reflecting God’s image. It’s important to recognize that each and every one of us is unique and reflects God’s image, regardless of race, sex, color, or religion. Another Jewish value I respect is Pikuach Nefesh, which emphasizes the importance of saving and protecting a life above all else.

The current Law Enforcement Officers’ Bill Of Rights allows for discrimination and police violence to continue without any accountability. LEOBR is one of the most extreme officers’ bill of rights in the country and contributes to the large amount of police brutality in our state. LEOBR allows five days before an officer can be questioned after an incident. When they are judged for misconduct, it’s other police officers that determine the appropriateness of their behavior. This perpetuates bias, lack of transparency and accountability, and a culture of protecting bad actors.

I refuse to stand by and allow innocent lives to be taken and watch police officers who have abused their authority be let off the hook. Staying quiet about the issue is only allowing more people to get hurt, and fewer police officers to be held accountable. Police officers are supposed to protect us, not pose another threat to thousands upon thousands of members in our community. When the people who are supposed to protect us are killing many of us for no reason and not being held accountable, something needs to be done. LEOBR allows discrimination to continue with no accountability. We must repeal LEOBR in order to work toward a just system. I urge this committee to issue a favorable report on SB627. 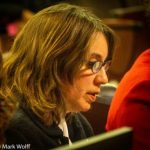