My name is Sarah Hiller. I work as a barista and server at a restaurant in Baltimore City and I am a member of Jews United for Justice, a group representing 5,000 Jews and allies in Maryland. I am here in strong support of HB166.

Jewish tradition teaches us that everyone deserves to be fairly paid for their labor. Increasing the minimum wage gradually from $10.10 to $15 would help workers in many industries, and I urge the committee not to leave out or forget the many Marylanders who are payed just $3.63 per hour by their employers.

Many people working for tips are able to leave each night with more than they might make on an hourly wage of $10.10, or even $15. But that pay is volatile, completely dependent on how busy the restaurant is on a given day, the cost of a given meal, and the generosity of each patron. This unpredictability makes it challenging to budget effectively for various expenses, and a slow day at the restaurant can be the difference between making enough to pay rent or not. There are many days that I leave work having made only enough tips to break even with the current non-tipped minimum wage of $10.10, a wage that is simply too low compared to the cost of living.

I work an average of 35 hours per week at the restaurant and additionally work part time as a nanny and a babysitter. Between student loans, car payments, and health insurance – which I do not get from work – I cannot afford to move out of my parents’ house, despite working more than full time.

I am fortunate to have parents who are able to help support me while I make too little to support myself, but many people who are working for tipped minimum wage do not have the same safety net. People are struggling to pay rent, to feed and clothe their children, because we have created a system where customers are expected to pay the wages of servers and bartenders, instead of their bosses. If patrons want to add a tip to show their appreciation for good service, that is their right, but it is unjust that our current system makes the presence and size of these tips into the substantive part of a tipped workers’ wages.

In the vast majority of our labor system, we expect that when an employee is hired by and works for and employer, that employee should be fairly compensated for their work. Yet in the restaurant industry, we have the absurd expectation that a wage of just $3.63 per hour is fair and reasonable. There are many tasks and responsibilities I tend to at my job beyond direct service to customers, and it is frankly demeaning to suggest that my time and efforts are worth so little. Yet the continued existence of a separate tipped minimum wage tells restaurant owners to value their employees at only $3.63.

As you consider HB166, please do not forget about workers in the service industry. The ongoing need to increase the minimum wage applies to minimum wage earners of all kinds, and I urge you to oppose any amendments that would maintain a separate tipped minimum wage as you vote in support of HB166. 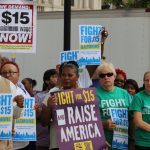