County Executive Elrich’s nominee is the right person to build a strong, trusting relationship between MCPD and the residents of Montgomery County.

ROCKVILLE – Jews United for Justice, an organization of thousands of Jews and non-Jewish allies across Maryland and DC, supports Tonya Chapman as the next Chief of the Montgomery County Police Department. As a member organization of the Silver Spring Justice Coalition, JUFJ has long advocated for safe, accountable policing in the county, and Ms. Chapman will be a strong ally in the effort to ensure that MCPD treats all people fairly, regardless of race or immigration status.

Tonya Chapman understands how to implement and model genuine and effective community policing. She has a history of assessing officers’ performance based on their positive interactions with community members, rather than on arrest rates for minor infractions. She is committed to transparency and to removing unfit officers from payroll, and will bring new strategies to end over-policing and violating the dignity and rights of Black and Latinx residents.

“In the past year, MCPD officers have brutalized and killed men of color, profiled Black residents, and turned immigrant community members over to ICE. This community needs to be able to trust our law enforcement,” said Laura Wallace, Montgomery County Senior Organizer with JUFJ. “Our Jewish tradition teaches that all people are created in the divine image, and all people deserve to be treated with dignity and respect. Tonya Chapman’s record shows that she will treat residents, whether officers or civilians, with the respect that we deserve.”

The County Council has taken steps toward equitable policing through passage of Councilmember Jawando’s LETT Act and introduction of Councilmember Riemer’s Civilian Policing Advisory Commission. Council President Navarro’s racial equity policy framework is a powerful tool to fight racial injustice in our county. JUFJ looks forward to the Council’s continuing work toward racial equity in policing and in lawmaking, and urges them to support Tonya Chapman’s nomination as a crucial step in that work.

Put judges and officers for yourself in all your cities that your God is giving you, for your tribes, and they shall judge the people with righteousness. You shall not subvert justice; you shall not show favoritism…justice, justice shall you pursue. – Deuteronomy 16:18-20 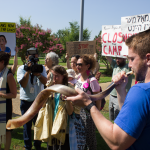