Jewish tradition teaches that “One must not stand idly by while your neighbor’s blood is shed” (Leviticus 19:16). Millions of us have witnessed the life of George Floyd end beneath the knee of a police officer as fellow officers stood by and ignored pleas to intervene, just one recent death in a long line of Black people abused and killed by police officers across this country — including right here in Baltimore County.

In August, County Councilmember Julian Jones introduced bill #73-20 to hold Baltimore County police accountable to the community, restrict use of force, and to make sure that officers who do the right thing are protected from retaliation. This bill has since been tabled (effectively killed). Councilmember Jones is planning on re-introducing many aspects of the earlier bill in the 9/8 Council meeting.

JUFJ leaders submitted public testimony in support of bill #73-20. Since then, JUFJ and the Chizuk Amuno Social Justice Advocacy Committee hosted a community conversation with Councilmembers Jones and Patoka. Read below to learn what happened in that meeting, what our next steps are, and ways to support enhanced police accountability in Baltimore County.

JUFJ’s official position on these bills is to oppose unless amended. The way the bills are currently written does not shift the balance of power into the community, and does not substantially provide an alternative to police policing themselves. For example, the bill stipulates that the two citizens who can be placed on the hearing board are “subject to the collective bargaining agreement [of the Chief]” and may be “voting or nonvoting members of the public.” This differentiation exemplifies that this bill does not, and cannot, achieve the ultimate objective of shifting power into the hands of community members.

You can take a look at the bill language here.

On the evening of Sunday 8/24, community members from across Baltimore County attended a Zoom conversation with County Councilmembers Julian Jones and Izzy Patoka, hosted by JUFJ and the Chizuk Amuno Social Justice Advocacy Committee. With around 50 attendees, constituents were able to have a conversation and ask questions about police accountability in Baltimore County – what happened with Councilman Jones’ bill #73-20, where do we go from here, and how can we help?

Bill #73-20 would have held Baltimore County police accountable to the community, restricted use of force, and made sure that officers who do the right thing were protected from retaliation. It also would have required two citizens be placed on the police disciplinary hearing boards, which would have increased community engagement and oversight in policing.

At the Council meeting earlier in August, Councilmembers Jones, Patoka and Wade Kach voted in favor of moving the bill forward. The other Councilmembers (Cathy Bevins, David Marks, Tom Quirk and Todd Crandell) voted to table the bill. When a bill is tabled, it is effectively dead. Even though dozens of constituents across the County waited hours to testify in support of the bill at the work session, these four Councilmembers thought it best to kill the bill.

While this was frustrating, Councilmember Jones is prepared to keep up the fight. He will be introducing a new set of police accountability bills in the 9/8 meeting. By introducing it as a set of seven bills, he hopes to be able to educate and work with the other Councilmembers to pass these critical measures.

It’s clear that the public supports increased police accountability, and we need to keep the pressure on members of the Council and the County Executive.

See options below to: 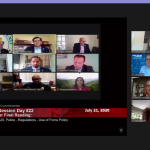 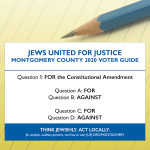